Are You a Troll?

Have you ever walked away from a post on Facebook or some other social media site feeling like you were a hashtag away from meltdown? You probably met a troll. One famous troll is Grendel in Beowulf. My favorite is the troll in Grimm's Three Billy Goats Gruff. But let's talk of Internet trolls. Some notables include Trisha Patyas, Lee Dawson, and Lovingkiara.

ave You Purposefully Pissed Anyone Off Lately?
If you are a troll, and you pissed everyone off, then kudos. You're a potty-mouthed prankster with time on your hands, but you did more overnight than most of us could all year. With your anti-social behavior, you sky-rocketed your SEO ratings and built a to-die-for social media platform. You sucked us in, pranked us, and you benefitted from creating conflict.

What Do Trolls Do for a Living?

Trolls piss off everyone on purpose.  (Imagine, we only do it when someone provokes us!).  They do it all the time, with a fusty eye to getting paid.  And eventually, they do (media exposure, social media following, appearances, donations, job offers, etc.).

Trolls do the following:

Can Being a Troll Benefit You?

If you're a Putin troll and you want to disrupt the American election, by allegedly provoking voters into not voting for Hillary Clinton, into voting for Donald Trump, or into not voting at all, then yes, you win. If you're trolling Amazon and give Megyn Kelly too many negative reviews--hold on! Amazon might be the only troll-free space on the Internet. So, no, even trolls can't benefit from their behavior on the big 'Zon.

Did Putin "throw" the 2016 election? Did Amazon quash Kelly's negative Amazon reviews? The better question is, can being a troll benefit "me," even if I'm not the POTUS or Megyn Kelly?

How Are Prankster Trolls Winning?

As it does in novels, conflict creates readers, and Internet trolls use conflict and discord to win their audience. In "How Trolls Are Ruining the Internet," Joel Stein cites Internet troll, Jeffrey Marty. Marty "has become addicted to the attention." This attention includes "[ . . . ] 1.5 million views of [Marty's] tweets every 28 days."

I looked @jeffrey_marty up on Twitter. 1500 (approx.) followers. Okay, not many. So how has he benefitted from being a troll? He did so by using his other troll ID, @RepStevenSmith, to create conflict, rapidly gain a wide audience of followers, including haters, and gain wide social media attention. Thus, Marty, aka @RepStevenSmith, bypassed starting from scratch and instead quickly built himself an Internet social media platform. Once his platform was established, he switched to using @jeffrey_marty.

In her BuzzFeed article, "The Internet's Favorite Congressman Is a Joke," Molly Taft says, "Rep. Steven Smith of Georgia's 15th District was the first member of Congress to endorse Donald Trump [ . . .]. Two things, though: Georgia doesn't have a 15th District and there's no such congressman named Steven Smith. [ . . .]."

That's right. Marty's a troll, aka Rep. Steven Smith. Taft goes on to say, "Now that he's being serious, [Marty's audience is] listening more than ever."

So You Think You Want to Be a Troll?

You can win as a troll, but you're going to take some heat. Like Rep. Smith, you'll be outed by someone, somewhere on the Net. You'll earn a reputation that'll outlive you (to its credit, social media has a memory the size of, well, forever). So if you think being a troll's the straightest path to Internet stardom, be careful. All social media sites have policies in place to take down trolls, metaphorically speaking, for stalking, mocking, and obscene attacks. In Indonesia, trolls are even jailed and/or executed.

Hi, all, Mary McFarland here. Thanks for taking time to read this. If you have a troll story, and a story about how you turned into a Billy Goat Gruff, shoot me a message on my Facebook page. https://www.facebook.com/AuthorMaryMcFarland.author/ 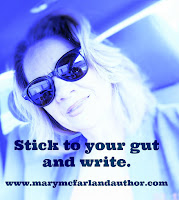 Posted by Mary McFarland at 4:09 AM No comments: