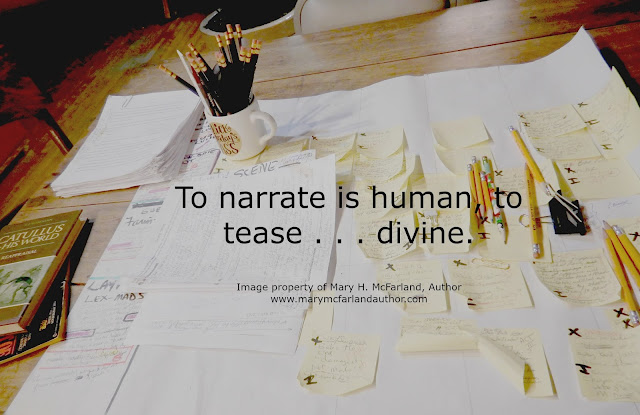 We're readers with individual tastes and needs, yes, but we're all on the hunt for that one novel.  We open it, start to read, and hallelujah!  We hear an angelic chorus, and we instantly know: this is no work of modest vocal force.  It's the one.  Yes, it's the big Messiah.  We don't just hear the words, but we also sense the author's fidelity to characters' moods, intentions, and motivations: we feel it. Reading thus becomes an ecstatic experience that seduces us, pulls us into the story and bonds us with the work's composer.  There's no greater experience in the realm of reading pleasure--none.  It's addicting.  We crave it.

Why?  Why do writers ignore the chance to create this near-sensual experience and, of more importance, why do we cheat ourselves of the chance to write stories that build pleasurable emotional bonds with our readers?  Many reasons, perhaps.  I've struggled to infuse my stories with this force, the force that makes characters' lives and personalities come alive, the force that grabs us by our souls' heels and makes us rise (pun intended), as King George II did when he heard Handel's Messiah, and cry out joyfully.  I can think of one reason indulged religiously by most writers, and it's as natural to us as breathing.  It's our desire to narrate as narcissist, rather than studying our characters' power dynamic and then articulating it with the emotional depth readers need and long for.

Whoa!  That's a mouthful.  Yup.  I'm not dumbing this down.  You've got to do your homework, which means immersing yourself in Foucault 101 (see link at bottom).  Don't like the idea?  Yeah, Fouc U, too.

I'm a writer (technical writer) by profession, with an extensive background in the software industry and, of late, a struggling fiction writer.  Thus, I automatically search for some formula I can hand you and say, "Here it is. Follow this, and readers will love your story."

There is no magic formula for anything in fiction writing.  On the other hand, I've found a way of exorcising my narcissist, while narrating with passion (hallelujah!) and emotional depth my readers want.  It's based on my beta readers' response to my present WiP, a literary erotica (out-of-category romance) couched in a suspense plot.  It's called Damage, and it is shaped by my immersion in studying Foucault's power dynamic as it relates to text and subtext.

As I said, exorcise your narcissist.  Tell her, "Be gone!"

Your story isn't about you: it's a composition, the same as Handel's Messiah, and it's got to reach your audience's "event horizon," a Foucault phrase.  In the most basic sense (Foucault is impossible to deconstruct definitively), but from my perception developed during my graduate studies, it's the point where readers' emotional core engages irrevocably with your story's text (and, especially, it's subtext).  Less literally, it means the "cosmic vault from which there is no return" (Görgün, Sevova).

So step one in reaching readers' event horizon is realizing: I'm not writing for me.  I'm writing to interact with my readers.  I'm creating emotional performance art.  I'm writing so readers can feel my characters' power dynamic, and that in response, my readers' will interact emotionally with my characters and their passion will be stirred.

The Poison of Reader-Character Interaction

The poison of writing that incites passionate reader-character interaction is descriptive narrative, simply describing what happened between characters and when.  When you do this, you ignore the potential to create a reader-character power dynamic.  All that remains is your own narcissistic interaction with your text and, some would say, your ego.

It's habit, like breathing, and it's difficult to consciously analyze that we're doing it as we write.  The good news?  We don't have to.  There are infinite points in our novels where we can stop, go back, or move forward for a look-see and say, "Oh, wow, this is the point where my protags switched power lanes."  For example, in Damage, my WiP, Madison Warner finally gets it that her former lover's suicide made her needy in her present relationship.  At that point, I could have simply narrated and described her reaction.  Instead, I analyzed her power dynamic with Bale Buckwalter.  How do I want Madison to wield--or not--her newfound power?  What will Bale do in response, and why?  How does the couple's relationship pivot--or not--on the alteration in their power dynamic?

Performing this type of power-dynamic analysis opens infinite ways to create scenes that excite readers, or enable us to return to old scenes and ask, How might I make this scene more emotionally satisfying for readers?

One Interpretation of Foucault's Power Dynamic

Doctoral candidates have built careers studying Foucault.  Today, he's viewed as anachronistic, but we can still learn a lot about passionate writing from the master of deconstruction.  In his dissertation on Foucault's power dynamic, Doctor Sergiu Bălan, with the Institute of Philosophy and Psychology, Bucharest, points out what we writers neglect, and that is the idea that power dynamics are not uni- or even bilateral.  They're organic and alive, and further, individuals are conduits of power, not passive recipients.

My understanding of Foucault's power dynamic has helped me create and tweak my characters' power dynamics in Damage, and further, it has helped me get the intensely passionate reaction at this point, which I'm seeking from beta readers.

Bălan, in "M. Foucault's View on Power Relations," sums it up as follows:

Usually, power is understood as the capacity of an agent to impose his will over the will of the powerless, or the ability to force them to do things they do not wish to do. In this sense, power is understood as possession, as something owned by those in power. But in Foucault's opinion, power is not something that can be owned, but rather something that acts and manifests itself in a certain way; it is more a strategy than a possession: Power must be analyzed as something which circulates, or as something which only functions in the form of a chain . . . Power is employed and exercised through a netlike organization . . . Individuals are the vehicles of power, not its points of application.